The Dryad Quartet is a contemporary fantasy series revolving around the fictional land of Euphora, where beings inspired by Greek mythology exist to preserve the balance of nature and human life, and to protect the living from the evil residing in the Underworld.  Take a journey into a world where Mother Earth and Father Sky exist, secretly hidden from human awareness, and yet crucial to the creation and stability of our world.  They are joined by those who control the elements, the Dryads, as well as the Fates, Muses, and Furies, all of whom play an integral role in preserving Earth and guarding those who inhabit it.

Book One – Breath of Air 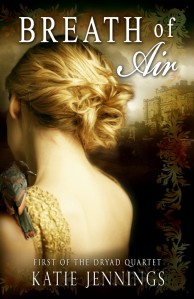 Available for FREE in eBook on Apple iBooks and Barnes & Noble, and for $0.99 in eBook and $11.95 in Paperback on Amazon.

Her name was Capri, and she was Air.

Abandoned as a young child, Capri Summers grew up in an orphanage with the knowledge that she was anything but normal. She possessed a secret gift—the ability to call upon the wind, to form clouds out of thin air, and to coax birds into dancing upon her palm. Little did she know, her gift made her extraordinary.

When a chance encounter with a young man from her past occurs, eighteen-year-old Capri is whisked off to a land she thought only existed in her dreams—a land filled with beautiful beings of mythological origin who welcome her as one of their own. Her true identity as an Air Dryad is revealed to her, along with some of the tragic details of her disappearance as a child. Reunited with her father and friends, Capri’s life is almost perfect—until the monsters of her past come back to haunt her.

With the help of Rian, a quietly serious Fury dedicated to protecting Capri at all costs, she begins to unravel the mystery surrounding her disappearance. As love grows between Capri and Rian, a ruthless killer waits in the shadows, prepared to do the unthinkable to keep Capri from the truth.

Her name was Blythe, and she was Fire.

In the wake of an earth-shattering revelation on Euphora, Blythe prepares to welcome her father home. After a lifetime spent hating him for a crime he didn’t even commit, she struggles to help him resume his duties as a Fire Dryad, only to realize he’s just as reckless and selfish as ever. Needing space, she leaves for the hot streets of L.A., only to find herself face-to-face with Euphora’s greatest enemy—the half demon, half Fire Dryad, Dante.

After a near brush with death, Blythe joins forces with the bounty hunter tasked with locating Dante—Jax Murphy. A slow-drawling Texan skilled at capturing demons, Jax is unlike anyone Blythe has ever met. He infuriates her and charms her all at once, and it isn’t long before a mutual dislike turns into a burning desire neither of them is ready for.

As they set off on a dangerous, cross-country road trip in pursuit of Dante, dark secrets about Blythe’s family will be revealed, threatening to destroy her very perception of what it means to be a Fire Dryad.

Her name was Rhiannon, and she was Earth.

All her life, Rhiannon bent to the will of her family. Under the strict, often unloving guidance of her parents, she grows into a young woman with eyes like ice and an unwillingness to feel. A protected heart is a safe one, and love is something much too destructive to enjoy.

With Dante a real and imminent threat, all of Euphora is on edge. Rhiannon finds herself caught between her unfaithful mother and miserable father, and as a result she gives in to the one thing she’s always refused to feel—love. Only she soon realizes that opening her heart to Liam won’t be enough to save her. Murder knocks on the doors of Euphora, and life as she knows it is about to change forever.

Book Four – Of Water and Madness

When Liam freed Rhiannon and won her heart, he finally had everything he wanted. Meanwhile, Euphora sits in limbo, waiting for an act of war. Dante is nowhere to be found, but it’s clear their enemy is biding his time.

A casual run in with a pretty blonde on the Gulf coast haunts Liam. He comes back to Euphora, changed, his mind no longer under his control. When the blonde joins him, accusations and suspicions run rampant. No one understands his sudden change of heart.

Neither does he. But by the time he figures it out, war is upon them and Rhiannon’s life is at risk. With all of Euphora in turmoil, will Liam be too late to save her? Or will war and madness consume him once and for all?