Fall is here and for the first weekend of Fall, get Embers at Galdrilene by A.D. Trosper at a reduced price! 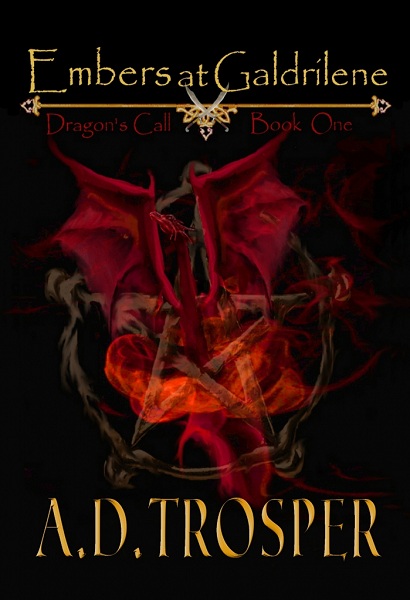 “A ray of light, a stain of shadow, shall endure to breathe life and death into the future”

As a Border Guard, it is Vaddoc’s duty to turn himself in and accept the death sentence with honor when he discovers he can use magic. But the ancient song of the dragons calls to him. Although pulled by duty and the honor of his family, the song proves irresistible. When he is offered sanctuary in Galdrilene, the old home of the dragons, he leaves duty and family behind to answer the call of the Song.

He is not alone in hearing the Dragon Song. The elements of magic are drawn together when he is joined by Kirynn, Kellinar, Serena, and finally, Mckale and Maleena who are bound to each other in a way they don’t yet understand. It’s a journey that reveals everything they have been taught to believe about magic and dragons is wrong. With the last of the dragons and the world at stake, Vaddoc and his companions will do anything, even cross through the realm of the dead, to reach a future they never thought possible.

What people are saying about Embers at Galdrilene

“Everything seemed to come alive and hit at the emotions of each and every moment the author described. It was as if you were there, experiencing the sorrow or joy alongside the characters, which is no easy feat and one that only truly talented writers can claim as their own” ~ Katie Jennings

“There are a lot of Point-Of-View characters in this one. Some of them have several chapters throughout the book, others have much less POV time. It could have flopped, but it didn’t. It was done well, and it worked.” ~ The Crooked Word

“Expect to be entertained with dragon fights, romance and witty comebacks in Trosper’s creation of an idyllic world. You are even given a rare insight into the workings of a dragon’s mind.” ~ Best Chic Lit

“When I was very young – though a voracious reader of anything I could lay my hands on – the very first book I ever personally bought was Anne McCaffrey’s ‘Dragon flight’. I’ve since bought the entire series in softcover about 3 times, testament to how well loved and frequently read they have been.

That being said I was extremely wary when this book was immediately evocative of every story Anne ever told about dragons, their ‘Impression’ on their destined riders, and the immutable bond between the two. Like Asimov’s laws of robotics, Pern’s dragon lore is indelibly etched as ‘fact’ in my psyche and anything markedly different does not sit very well with me at all.

I am immensely pleased to say that A.D. Trosper did not let me down. There was enough of Pernish dragon-lore to satisfy my need for continuity, whilst at the same time enough differences to make this clutch of dragons her very own. Well done Ms Trosper!” ~ Richard King

“The intricate details about each character, like Kellinar the thief, or Maleena the young woman shunned by the people of her village, brings the story to life. The bonds of friendship are remarkable and those bonds push them to the limits for each other. Another interesting aspect of relationships in this book is the one the riders develop with their dragons.
Evil lurks at every corner and eventually bursts, bringing forth a vivid confrontation that kept me at the edge of my seat, turning page after page.” ~ Annamaria Bazzi

So curl up with a great fantasy read and enjoy the changing of the seasons.